Food as medicine is a foundation of my wellness practice at Vitality. Consuming the proper nutrients, in combination with a healthy lifestyle, enables your body to grow, detoxify, and heal from most of life’s ills. To prevent or recover from deficiencies or disease, how should we decide what foods to focus on for optimal health?

One of the most important compounds that our bodies produce is called glutathione. It is a powerful antioxidant comprised of three amino acids—cysteine, glutamic acid, and glycine—built from the elements of carbon, hydrogen, nitrogen, oxygen, and sulfur linked together in the following molecular structure: C10H17N3O6S.

As our bodies age, and depending on our environmental conditions, our natural abilities to produce many compounds like glutathione can slow down and become weaker. However, we can partially counteract the effects of aging and pollution by providing our bodies’ cells with the raw materials needed for vital processes to function in an optimal, healthy way.

Milk thistle has an incredible amount of health benefits. 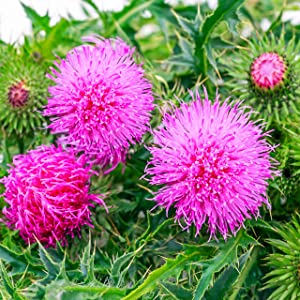 This little ragweed is a natural herb with many anti-inflammatory and antioxidant properties. It has been used as an herbal remedy over 2,000 years for a wide range of diseases including liver, kidney and gallbladder problems. It is also has antioxidant benefits similar to that of vitamin E or vitamin C, which help fight free radical damage.

One of the primary reasons that milk thistle is so beneficial to overall health is that it purges the body’s natural immune fighting, toxin detoxifying organ: the liver. The liver is your body’s most primary defense against dietary and environmental toxins.

After time, the liver can become so full of these cumulative toxins that it begins to function poorly, and can even shut down. Signs and symptoms of this include poor skin tone, headaches, fatigue, and overall lowered immune function. The liver is responsible for performing over 300 metabolic functions throughout the body, so you can see how an ineffective liver can be such a detriment.

The active compound in milk thistle extract, called silymarin, has been studied for many years and is found to be one of the best supplements on the planet for liver health. ( 1 )It has been shown to protect liver cells by essentially blocking or neutralizing certain hepatotoxic compounds such as acetaminophen, non-steroidal anti-inflammatory drugs (NSAIDs) such as ibuprofen, anti-depressants, and cholesterol lowering medications. (2 )Furthermore, preliminary research shows that silymarin may not only protect liver cells, but also regenerate ones that become damaged. (3 )

Laboratory research has now shown that the silymarin from milk thistle promotes the synthesis and activity of certain enzymes that act in detoxification pathways. In particular, silymarin stimulates the glutathione S-transferase pathway, which enhances the intracellular concentrations of glutathione. ( 4) Glutathione is known to be the body’s master antioxidant and is vital for proper liver function. It is also essential for fighting off disease and maintaining overall health.

Glutathione is so critical in illness prevention that Jeremy Appleton, ND – chairman of the department of nutrition at the National College of Naturopathic Medicine in Portland, Oregon, stated the following:

“If you look in a hospital situation at people who have cancer, AIDS, or other very serious disease, almost invariably they are depleted in glutathione. The reasons for this are not completely understood, but we do know that glutathione is extremely important for maintaining intracellular health.” ( 5 )